I wouldn't normally harvest my rhubarb for another 3-4 weeks, but the Tuesdays With Dorie online baking group was making a rhubarb upside-down cake, so out I went with my knife.  The rhubarb grows under a lilac hedge which smells heavenly right now.  The rhubarb stalks were not very long yet, and I cut off half the plant to get the 1 1/4 pounds of rhubarb for the recipe.  I hope the plant will keep growing larger so that I can use more rhubarb later in June. 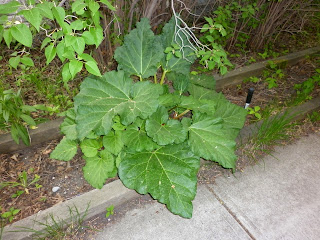 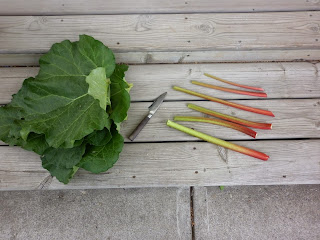 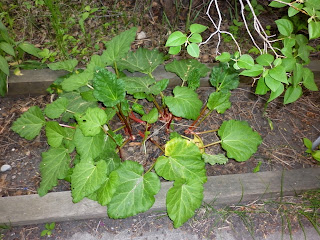 The recipe was fairly straightforward, except for caramelizing the rhubarb.  I melted the butter and stirred in the sugar as directed.  As the mixture was heating the sugar started to make clumps.  I was concerned about this and also not sure what exactly "just starting to color" should look like, so I dumped in the rhubarb and carried on.  The rhubarb never browned but did reach a nice soft but not mushy consistency.

The cake batter came together quickly and I slowly and gently spread the batter over the rhubarb.  I added three minutes to the 25 minute baking time listed in the recipe.  The cake came out of the pan easily and cleanly.

It is kind of a homely looking cake.  If I make it again I will do the apple jelly glaze and perhaps add the optional grated orange peel to enhance the flavour.   Instead of whipped cream I will serve with vanilla Greek yogurt. 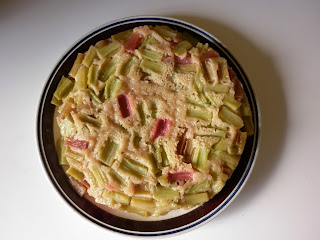