Cherry Crumb Tart and catch up

Because I had some catching up to do I made two batches of Sweet Tart Dough.  But then when I washed the food processor I noticed that a small piece of hard plastic had come off the top.  It could have happened weeks ago but I didn't want to risk feeding anyone hard plastic shards, so I threw the two unbaked crusts out.  I made the Cherry Crumb Tart and catch up Apricot-Raspberry Tart crustless. 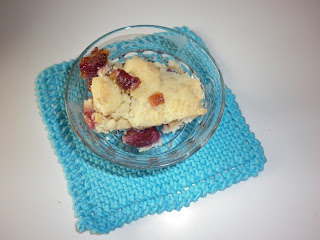 Dorie suggests pitting the cherries with a chopstick.  I wasn't able to get this working for me and instead split and pitted the cherries using a small curved fruit knife.  The pitting went very fast.  The filling and the streusel were easy to make.  I baked in a square glass dish, pulling the dish from the oven when the streusel was just starting to look toasty.

The end result was likely less rich than the original with crust recipe, but delicious.  One taster commented on how luxurious it tasted.  When we ate the last of it two days later the cherries had lost some of their taste so in future I would make this for consumption within a day as noted in the recipe.

Next up was the Apricot-Raspberry Tart, sans crust. 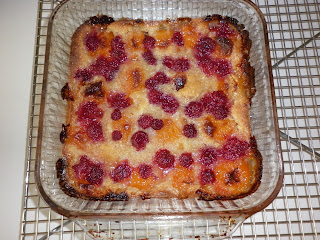 I made the Apricot-Almond Cream Bonne Idee version, thinking that the almond cream would replace some of the heft lost with the crust.  I picked the last of the raspberries growing outside to add to the apricots on top of the almond cream.  Again I baked this in a square glass pan because I was going to a potluck and the dish has a nice lid.  The flavour of the end product with good, though perhaps a bit too sweet (did I sprinkle too much sugar on top?) and very soft.  With a smaller dish and less baking time this would have been even better.

Making these recipes was a revelation for me.  I had never baked with cherries or fresh apricots and never knew how good they taste in fresh, home made baking.

One more catch up.  I made the Vanilla-Mango Panna Cotta two weeks ago along with the group but never posted it. 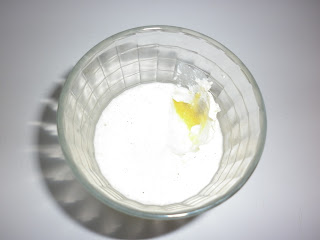 I have made panna cotta before and love how easy and elegant it is.  With a vanilla bean to flavour the heavy cream and milk it was just superb.  I substituted lemon juice for lime juice in the mango puree that goes underneath the panna cotta.  I don't like lime, but perhaps I used too much lemon juice or not enough honey.  The mango puree was too sour for me, but other tasters liked it.