This week the Tuesdays With Dorie online baking group made Apple Kuchen:  a Tall Apple-Custard Tourte.  This recipe is in the Simple Cakes sections of Dorie Greenspan's Baking Chez Moi but I wouldn't categorize it as a simple recipe.

First you mix up a crust in the food processor, roll it out, chill it, and fit it into the pan.  Mine was kind of messy and perhaps not as thin as it should have been, but surprisingly I was able to press it into my ten inch springform pan without too much difficulty.

The filling is a mixture of graham cracker crumbs and melted butter, topped with 3 pounds of chopped apples.  That was more apples than I realized when I first read the recipe.  It took me awhile to cut them up.

The crust and filling bake in the oven for 15 minutes and then the custardy topping of eggs, sugar and cream is added.  The recipe says to bake for 60 to 70 minutes.  Mine was in the oven for an hour and 20 minutes.  Because of the time it took to chop the apples and the extended baking time I had to leave before the final step of adding sugar and melted butter to the top and broiling.  I don't know how long my cake was under the broiler, but it came out tasting delicious. 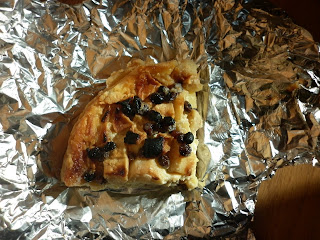