This week I made Esquimaux Pops for Grown-Ups for the Tuesdays With Dorie online baking group.

I made several substitutions because I wasn't comfortable using raw eggs and I wanted the dessert to be alcohol free.

If you are a vegan or read vegan food blogs you will have heard of aquafaba ("bean water").  This is the liquid from canned beans.  It sounds disgusting, but amazingly it whips up just like egg whites.  I've been wanting to experiment with aquafaba and this was a good opportunity.  I used the leftover liquid from an unsalted, BPA free can of navy beans.

Here's how it looked after whipping: 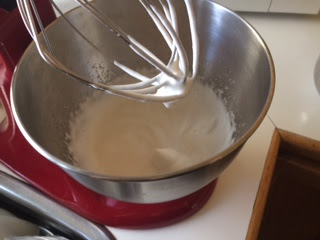 It did not taste like beans, in fact it was pretty tasteless.

Because I wasn't using liqueur I wanted to add another flavour, so I put in a frozen banana.  Frozen bananas whipped up in a food processor make good banana soft serve ice cream, so I thought this would work well.  Unfortunately the cold banana made the melted chocolate mixture harden up, so I heated the mixture gently in the microwave and carried on.

Thinking that the banana was sweet I didn't add the confectioners' sugar called for in the recipe.  This was a mistake, as the final result could have been sweeter and more flavourful.  My taster suggested that almond extract would have made a nice addition.

After reading about other people's difficulties in getting the pops out of the molds I just froze the mousse in a single container.  I leave it out to soften before serving and that works well.  It was fun to play around with this recipe. 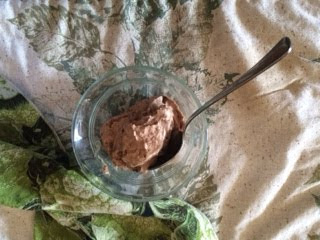